Graveyard of Missions No More 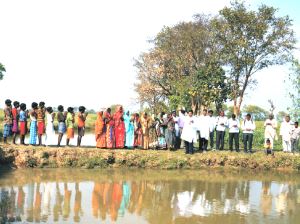 BORN Christian Church (a member of Faith2Share) is reaching out to mostly Hindu-background people and Dalits in Bihar, one of the poorest states in North India. Bihar was once known as the "graveyard of missions" but now the faithful service of generations of missionaries is bearing fruit as large numbers respond to the Gospel of Christ. A group of new believers recently travelled to Bihar from the neighbouring state where there is more restriction on following Christianity and they were baptised in the Ganges, a sacred river for all Hindus. On the eve of Diwali, one of the most important Hindu festivals, a group of 10 ten believers, all from very poor villages, committed themselves to following Christ and were baptised. In addition to church planting, BORN is also involved in setting up informal schools for village children, as there are no government schools in many rural districts of Bihar.