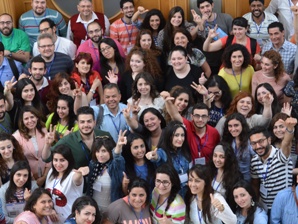 Despite the dreadful destruction of their country young Christian women and men in Syria are full of hope. After all the fighting is over it will be their responsibility to rebuild their contry. Last month (May 2016) youth workers from Syria were amongst 130 Christians who gathered from Iraq, Syria, Jordan and Lebanon for the sixth regional youth conference in Beirut. They represented 17 church denominations and 6 different Christian organizations throughout the Near East. This conference was organized by our Youth Initiative (Katalyst).

"The goal of this year’s training" reports NEI "was equipping the youth workers with biblical, logical and scientific arguments, in order to talk to atheists and agnostics. Atheism is a growing world view in the Arab world during these very troubling times. This was done, while tackling issues related with the problem of pain and evil in the world.
They were heavy and intense sessions, but very informative and mind provoking.

"At the end of the conference, every participant received a free USB full of Arabic youth work materials that were produced by the creative writing team that have been writing these materials since May 2015."