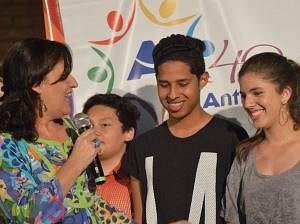 2014 was the year when Latin America became the largest Christian continent, passing Europe (including Russia) for the first time.* However, Africa is predicted to take first place and by 2050 Asia will also have overtaken Europe.

This means that in 2017 65% of the Christian family lives in the "Global South" and by 2050 this will rise to 76%. This statistic underlines very clearly the vital importance of the work we are engaged in through the Faith2Share network to strengthen and redefine the relationships between Christians in the Global North and South so that we can use the vision, commitment and resources of the growing churches of Latin America, Africa and Asia to their full potential.

Two other interesting statistic from this same research - one hopeful the other not:

1. The fastest declining religious grouping in the world today is "atheists".

2. In 2016 more money was lost through crime in the church ($53 billion) than was spent by international mission agencies ($48 billion)!

*Figures from the Centre for the study of Global Christianity.