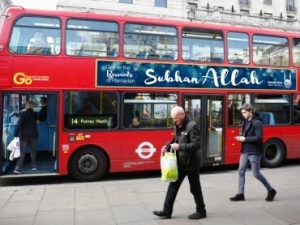 The charity Islamic Relief has launched a fundraising campaign to coincide with Ramadan which will feature on more than 500 buses in the UK cities of London, Birmingham, Manchester, Bradford and Leicester.

The campaign slogan is "Subhan Allah" - meaning "Glory to Allah" in Arabic - and aims to encourage Muslims to donate to support victims of the Syrian civil war. Ramadan starts on 7 June and is a time when Muslims traditionally fast and give to charity.

Islamic Relief says it wants to “break down barriers” and portray Islam positively by launching a new advertising campaign.

Imran Madden, director of Islamic Relief UK, said: “In a sense this could be called a climate change campaign because we want to change the negative climate around international aid and around the Muslim community in this country.”

See more on this story here.