Ukraine gets Bible in Tatar - and wins Eurovision 2016! 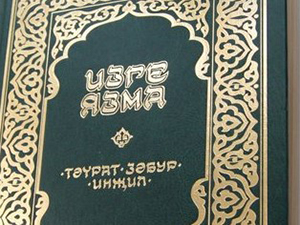 The nation of Ukraine is in the headlines this week after a Crimean Tatar singer called Jamala won the Eurovision song contest last Sunday, with a song about the sad events in the history of Crimean Tatars.

It was encouraging to see Europe vote for a song about this small, often forgotten nation. But what is even more amazing, is that the Institute of Bible Translation has just published for the first time ever the full Bible in the Tatar language (including Crimean Tatar, too).

The translation work started in the 19th century but was interrupted many times due to political and religious pressures. There are four million people for whom Tatar is their first language which makes Tatars the largest minority group in the Russian Federation.

We praise God for this milestone and for so many people who can read the Bible in their mother tongue for the first time. Please pray for the work of presenting and distributing Tatar Bibles in many churches during May and June.