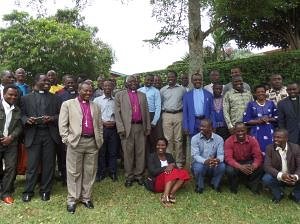 In rural Rwanda two groups of people gather together. Gradually, they cast lots and someone from the smaller group forms a little team with three people from the larger group. They embrace one another, smile African smiles and take photos with their mobile phones. What’s happening?

This is the climax of Faith2Share’s recent Whole-Life Discipleship Programme in Rwanda but none of the Faith2Share staff had planned it this way. The participants themselves had chosen a cultural expression of ‘blood brothers’ – people united by a solemn vow. The larger group, from the Diocese of Byumba, was pledging itself to support the smaller group, from surrounding dioceses, in passing on the training they had received about following Jesus in every area of life. Of course, we could not have wanted anything more than such a beautiful response to the principle that this training is not just for the delegates themselves – it’s for others, too.

There was serious discussion about the causes of the genocide in 1994 and what could be done to prevent a recurrence of such terrible bloodshed and trauma. Many participants felt that the danger of inter-tribal conflict is still present and affirmed the urgent need for true discipleship – Jesus-shaped living – to combat the dark forces of mistrust and hatred.

The Most Reverend Onesphore Rwaje, Archbishop of Rwanda, gave a passionate talk about the importance of discipleship, underlining its importance for the Anglican Church of Rwanda.

Faith2Share's Whole-Life Discipleship Programme is a tried-and-tested approach which is thoroughly biblical, interactive and customisable to each context (as we saw in Rwanda). The training enables mission leaders to help others follow Jesus in every area of life: family, tribe, politics, community, finance, workplace and with those of other faiths. Previous programmes have garned these responses: “"the week was a mind blowing week for me" (Nigeria, 2013); "an inspiration" (India, 2012); "new insight of challenges facing our faith and how to deal with them" (Kenya, 2013); "I got more courage in what I was doing" (Nepal, 2014); "helps me persevere no matter how bumpy the roads are" (Addis Ababa, 2014); "an eye-opener" (D.R. Congo, 2015); ""Never to return the same but with impact in my life" (Ghana, 2016); "enriched, sharpened and broadened the mission strategies" (Bangalore 2016); "life-changing" (Uganda, 2017); "opens my mind as to how the Scriptures can readily be explained" (Jamaica, 2017); "This consultation can be change my ministry because could learn many ways and method of the gospel to unreached people." (Thailand, 2017).