Arrests in Nepal for distributing scripture to children 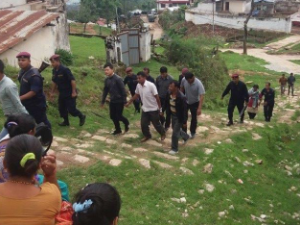 Seven people have been arrested in Nepal, including the proprietors of two private schools in Dolakha. Those arrested have been accused of evangelising by distributing children's Bible stories among students.

Prakash Pradhan is principal of Mout Valley boarding school, while Bimal Shahi is principal of Modern Nepal School. And five staff who work for Teach Nepal, a Christian teaching organisation, are also among those accused. Both Pradhan and Shahi are Christians and organise extra curricular teaching activities for their students.

According to an article by Nepal Church.com published yesterday (9 June), police are preparing to file a case against those alleged for committing acts of religious conversion by preaching to young school children, prohibited by article 26 (3) of the Nepalese constitution 2015.

The accused are required to make a verbal commitment not to repeat the same act in the future in the hope that they will be freed by tomorrow morning.

An emergency meeting of Nepal Christian Society is being held in Kathmandu. A group is heading to Dolakha early tomorrow. A prayer meeting has also been called as Christians around the world are also joining in prayer.

UPDATE The 11 June report from local Christian leaders can now be read here.

UPDATE 2 On 17 June we received news that all those arrested have now been released on bail together with one local pastor had also been detained for further questioning. Our prayers are still requested as the case is considered by the authorities.