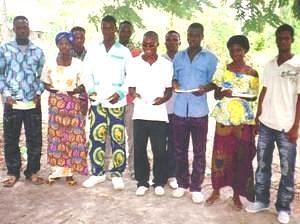 'When our team first went to share the gospel with the people of Godo, Dankpen in Togo, the local people kept their distance' writes Ngozi of Faith2Share member Church of Nigeria Missionary Society. ‘A number of young people, however, came to listen and ask questions and 44 of them came to faith. They were mostly subsistence farmers. The men wore dirty, torn clothing while the women and children were virtually naked most of the time. They now testify to God’s power at work in healing (including from snake bites) and deliverance. Many of the young people are taking literacy seriously and attending school.

Ngozi explains how Faith2Share had played a role in the development of her ministry in Togo. She met Rev and Mrs MacCarthy at a Faith2Share consultation. They subsequently made a visit to Togo and provided help with adult literacy training. 'Faith2Share gives room for networking and receiving adequate help that consolidates and enhances the work.'

'Peter and David Sambire,' (left and third on left in picture) 'are outstanding examples of God's work in God,' Ngozi explains, 'Peter was able to read and write a little but David did not attend school at all. They came to faith and joined in with our discipleship and evangelism. In the course of time, a church was planted where they live and it was placed under their care. David has taken the decision to start school from scratch. Peter demonstrates an amazing grace in teaching and preaching the word of God. In recognition of this he was ordained in 2015 to be one of the first indigenous, ordained Anglican priests in Togo. God has so strengthened their faith that not only their own lives but also the lives of their flocks are brimming full of testimonies.'