Healing for Victims of Violence in D.R. Congo 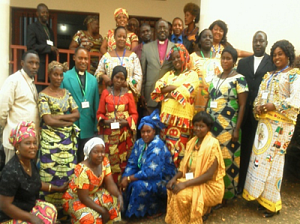 It is well known that The Democratic Republic Congo has witnessed terrible armed conflict in recent years. But it is not generally understood that violence against women and girls, exacerbated by the fighting, has continued even after the end of hostilities.

Sadly, some elements of traditional culture facilitate violence against women but Christians are involved in bringing hope and healing to victims.

The Centre of Non-Violence for Reconciliation and Peace (CNVRP), a department of the Anglican Church in Congo, has organized training courses (pictured) in order to assist women in overcoming violence and misogyny. The attendance of men at such training programmes is important, according to Dr Kahwa Njojo, since they have a role in influencing others to embrace gender equality. The CNVRP has also organized courses for the many victims of interethnic fighting who continue to suffer the effects of trauma.

Dr Kahwa Njojo attended a Faith2Share consultation in 2015 and the Centre he has set up is an excellent example of holistic mission, one of our core commitments.