How God opened my eyes to the poor 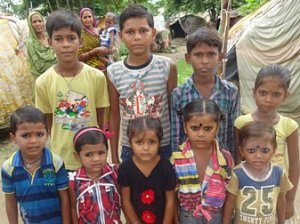 "For 20 years I had seen the same poverty in India," writes John, a Christian worker in India, "people living without shelter, clothes, shoes or food. The government does not provide but I was no better. Then, one morning, I opened my Bible and God took me by surprise. God spoke to me about caring for the poor and deprived. After that, I saw them everywhere I went because God had opened my eyes. I went to talk to them but, at first, they were afraid. I tried to explain that I was their friend, not their enemy. I went from door to door collecting clothes for them and they were so happy to receive these clothes. But despite this joy, I was not satisfied. The Lord Jesus was speaking to me and telling me that we needed to transform their lives. God said to me, ‘Get up’. ‘Where?’ I replied. ‘Just do as I say’, came the reply. God told me to take my scooter and ask the poor children to go to school. I had been trying to persuade them for 6 months but that day they agreed straight away. We now have 40 students and the older children have learned to read. The children are also growing in their faith, praying and learning the Bible. We have now begun to build a classroom so that the children will be protected from the weather." New Life for India is a member of Faith2Share, a network of mission movements committed to whole-life discipleship. Please pray for God’s provision for the classroom.