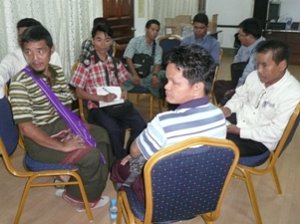 Faith2Share member NAMS has been invited by the Anglican Bishop of the Diocese of Mandalay to go to Myanmar and train key clergy and lay leaders of his diocese in discipleship and church planting among the many people groups there.

The invitation came about after Manik Corea, NAMS regional operations for Asia, met Bishop David Nyi Nyi Naing at a Faith2Share Leadership Consultation in Myanmar in May 2015. Bishop David then asked Manik and NAMS Servant General Jon Shuler to visit him in his diocese in August 2015, which they did, to talk about collaboration.

The Diocese of Mandalay is a large one that shares its eastern borders with China and western border with India - and includes the Shan, Kachin and Chin people groups as well as the majority Burman people. Most of these are Buddhist or animists. Bishop David is also Director of Mission for the whole Province of the Anglican Church of Myanmar.

NAMS says it will be sending a team of six people from three of its bases in Asia to train about 30 leaders in August.

“We expect to run the training over a two-day period where we will share Biblical principles for disciple-making that leads to reproducing communities of faith,” explained Manik Corea. “We are also praying about the potential of a support base for work in Mandalay if God should open the door,” they added.