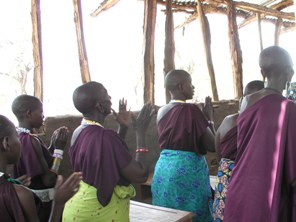 “Let’s pray for healing in the name of Jesus”. These words were spoken not by a Christian but by Omary*, a Muslim primary school student whose Christian teachers had taught him about prayer in Jesus’ name. Omary’s friend was suffering with an eye problem which caused constant weeping but they knew how to pray. Omary’s friend was healed as they prayed together and word spread amongst the local community.

Omary’s school, run by a Faith2Share member in Africa, has grown from small beginnings. Established in a majority Muslim area where only 1% are Christian, it was greeted with some suspicion at the beginning. However, the excellent educational standards and scholarships for poor families soon won over those in doubt. Children at the school learn to read and write more quickly than at other schools and benefit from Christian teaching and example. The school is a wonderful example of whole-life discipleship, which is a central value for Faith2Share.

“What have you learned at school?” Rashidi* asked his son. Hassan* was keen to demonstrate his impressive progress in reading and then began to teach Rashidi Christian songs. Gradually, the songs had an effect on Rashidi and he put his faith in Christ.

In another Muslim family, 12 year-old Salim* was afflicted with a swelling which would not respond to treatment either through traditional medicine or at the hospital. A local Christian lady prayed for him and he was healed. As a result, Salim’s father gave his wife permission to take the boy to church. In the end, Salim and both his parents came to faith in Jesus Christ.

Through the educational service offered to the community and through the spiritual blessings received in many ways, 23 people have been baptised and a new community of Christian believers has been established. A double blessing: educational and spiritual!