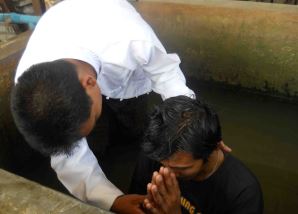 A senior official in a ‘closed’ Asian country* faced a challenge beyond his political influence: his daughter was losing her sight and the doctors could do nothing for her. Then a man in white robes appeared to her: ‘You will get better and attend two art schools.’ The official reflected that the ‘man in white robes’ sounded rather like Jesus. The daughter got her sight back and, just as the man in white had told her, attended two art schools. The official came to faith in Christ and a member of the Faith2Share network attended his secret baptism some years ago.

The official held a position in the country’s Department of Religion and, where appropriate, he used his influence to support the rights of churches. He also modelled a very different, more humble approach to leadership. For instance, he would eat with his driver rather than eating separately like most senior officials. It was not at all usual for the Department of Religion to show any sympathy for Christians and a complaint was raised against him. However, an investigation found that he had not done anything wrong. Instead of being punished, he was later promoted and held a position of national importance. For this senior official, discipleship meant acting justly, behaving humbly and using his position for good.

*For security reasons neither the country nor an actual image of the official can be published.