The Cost of Discipleship in Egypt 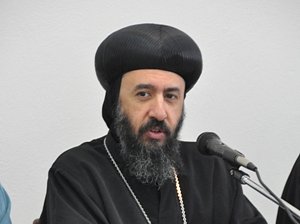 The cost of following Christ in the Middle East and North Africa was once more underlined with the savage bombing on Sunday of Coptic Christians in Egpyt. Two separate explosions targeted St George’s Coptic church in Tanta and St Mark’s Coptic church in Alexandria on a day when worshippers were celebrating the triumphal entry of Jesus Christ into Jerusalem. The BBC reported that as many as 44 people were killed in the attacks, including several police officers.

In a statement Bishop Angaelos, General Bishop of the Coptic Orthodox Church in the United Kingdom, wrote, ‘we share in the pain and heartbreak of [the victims’] families and of all those affected by today’s incidents. As we celebrate the Feast of the glorious Resurrection at the end of this week, we are reminded that our life here on earth is a journey often filled with pain, at the end of which is a promised glorious and eternal life void of such suffering and evil.’