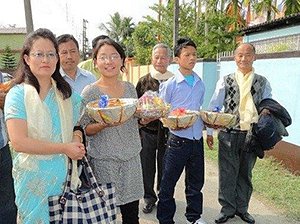 We pray today for the global impact of mission, especially through the 6,000 mission workers within the Faith2Share network. On the eve of the Bangalore Leadership Consultation, pray for all the delegates, speakers, organisers, and those who are going to act as our hosts in Bangalore, India.

Today is the Fourth Sunday of Easter, the day on which the church traditionally celebrates the witness of Dorcas (Tabitha) from Joppa who was raised to life by Peter after her death. Dorcas was so loved within her community because of the love she showed in acts of charity and kindness. Her witness to her faith in Jesus was very practical. Please pray for all those within the Faith2Share network who serve in practical ways - especially those whose service leads to tiredness and sickness. May they, like Dorcas, be raised to new life and witness.

"Peter sent them all out of the room; then he got down on his knees and prayed. Turning toward the dead woman, he said, “Tabitha, get up.” She opened her eyes, and seeing Peter she sat up. He took her by the hand and helped her to her feet. Then he called for the believers, especially the widows, and presented her to them alive. This became known all over Joppa, and many people believed in the Lord." Acts 9:40-42