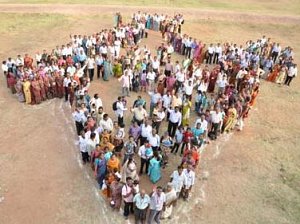 On 9 June 1967 five brave pioneers began their ministry in Periyamalai (Dharmapuri District), marking the beginning of this indigenous mission movement.

Writing on the golden anniversary FMPB President John Samuel thanked the Lord, ‘for this God-ordained movement, which has raised thousands of believers … across India … This is an occasion to celebrate that the Lord has enabled us to establish more than 300 mission fields in the last 50 years … We are excited by the encouraging testimonies of thousands … being transformed by Jesus Christ in every part of India, in hills and the valleys, amongst the poor and the down-trodden.’

President Samuel urged FMPB not to rest on their laurels, however. ‘It’s essential,’ he wrote, ‘that we plead and cry before God in prayer and penitence … May the Lord bring healing and blessing to the nation! On this great day, it would be good if we can recollect the history of FMPB, its humble beginning, its vision, its objectives and its ethos. A large nation of 1.3 billion people is awaiting us to have God’s touch and God’s blessings. “Blessed is the nation whose God is the Lord” (Psalms 33.12b) … Let us commit ourselves before God to 'rise up and build' the missions movement together with courage and commitment, with unity and holiness. Let’s build a new India, a blessed India!’